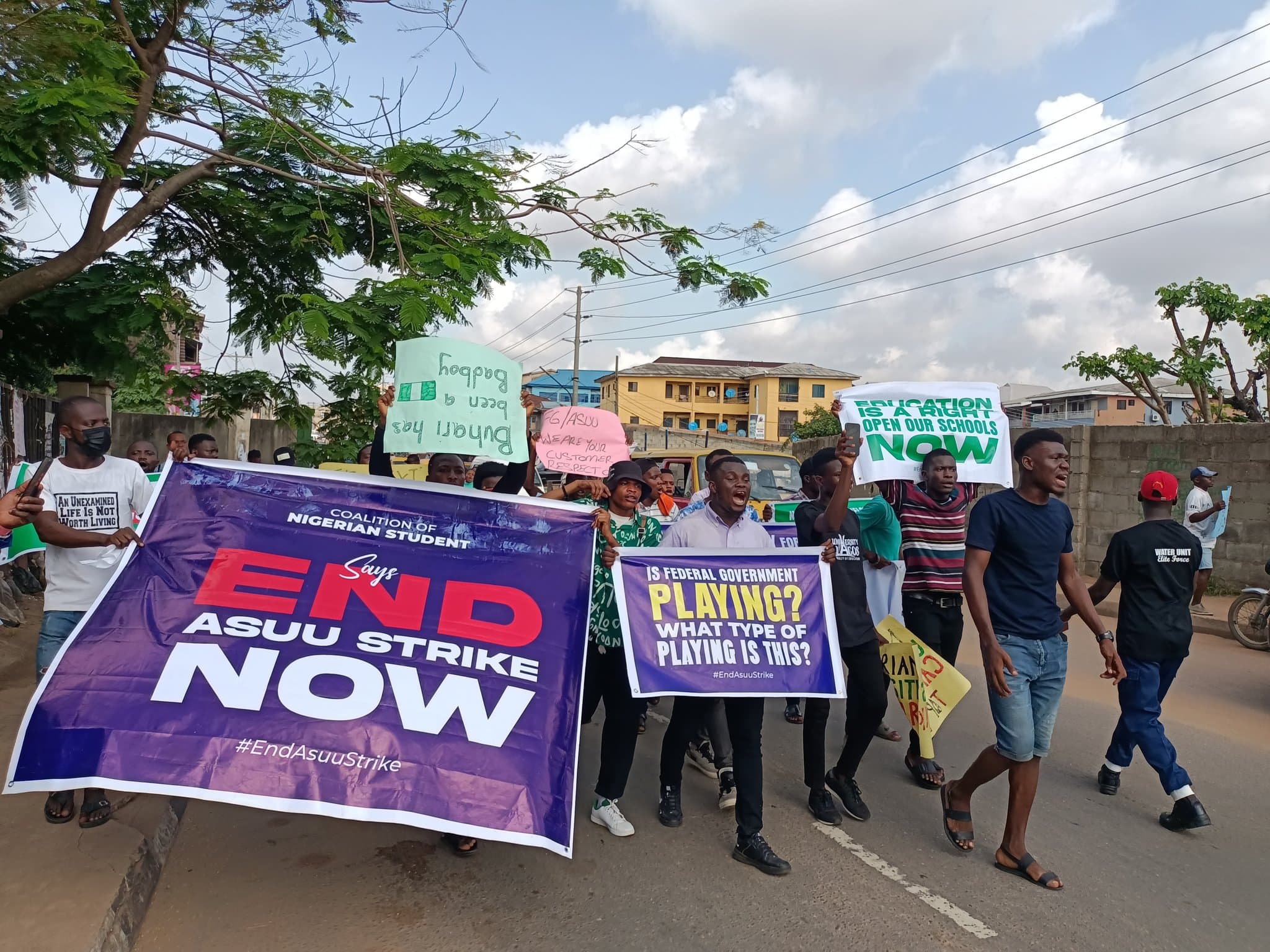 The educational system in Nigeria is one to be bothered about. Most students have gotten tired of the frequent occurrence of strikes which has affected many areas of their lives.

As a result of these occurrences, many of them have ventured into different things. From learning a skill to starting a business. Others have also ventured into crimes and immorality.

Asides from the education sector, the strike has affected other sectors, especially the economy sector.

Let us take a look at some of these implications.

Below are some of the implications of the ASUU Strike

During the strikes, students are forced to stop all ongoing academic activities which automatically affects them when they resume again.

Most of them don’t go back to their books to read and engage in whatever activities they feel like.

Having strike breaks or any other type of breaks at all that disrupt academic flow is not always beneficial to the students.

For instance, according to statistics, the general result of JAMB in 2020 was the lowest.

This was due to the effect of the Covid-19 pandemic.

Students had to stay at home during the period which distracted them from their academic capabilities.

And when they returned, they found it hard to fully adapt to the system.

Disruption of the academic calendar

Since the strike happens on a regular, it means every year that it has to happen, the university would need to restructure its calendar.

This could be very disorganizing for the school and might be forced to rush academic sessions for students to keep up.

Many students who attend federal and public institutions graduate late due to the strike.

And when applying for jobs for roles of their interest, they are probably not considered.

This is because there has been an age limit placed on the roles and anyone above the age limit might not be fit for the job.

Loss of interest in the program of study and school

After students go on strike, many times it gets extended, delaying the number of months to graduation and number of years in school.

However, students find other life passions and things of interest.

And then they begin to lose interest in their program of study.

Increase in immorality and crimes

As the strike takes place, students are no longer engaged in school activities.

This would encourage them to go into other activities which might not be good.

Some of them might involve in activities that are illegal and are vices to society.

Another effect of the ASUU strike is that it would incur more costs for students and their parents.

They would have to pay for extra accommodation, especially for those staying in private hostels.

With the stipulated amount of days and an elongated strike, it might allow the one year or six-month plan to expire.

And by the time they resume, they will need to use to pay for another rent.

What is ASUU ABOUT?

The Academic Staff Union of Universities, popularly known as ASUU, is an organisation that represents academic staff members in the federal and state universities in the country.

Founded in 1978, ASUU has struggled with the Federal government over issues concerning academics and the well-being of students and lecturers.

The union usually make its voice heard by embarking on industrial actions and halting academic activities.

Whenever the members of ASUU go on strike, students end up taking longer years to complete a defined course of study.

The academic calendars of, significantly, federal and state universities, are constantly disrupted.

But how come ASUU strikes have become regular occurrences?

Let’s look at the history of ASUU strikes in Nigeria.

ASUU strike started in 1988, during the military regime of Gen. Ibrahim B. Babangida.

The union organised an industrial action to demand fair wages for lecturers as well as decry military power.

ASUU’s primary focus was on financing and revitalising the Nigerian public universities.

The refusal to always give serious attention to the country’s education system, especially regarding teachers’ salaries and infrastructural development of the universities, ASUU strikes usually last very long.

Infact, it has become a norm for ASUU strike to take place during every regime.

Although the strike might not be the best solution to their demand, it is what the Government understand.

As every time it occurs, it always results in some sort of compromise which leads to resolution. 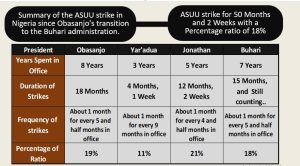 There have been over 40 months of ASUU strikes between the regimes.

During the tenure of Obasanjo, the ASUU strike took place for 18 months in his eight years in office.

This is one month for every five and a half months in office.

Following is Yar’adua, who spent the least time in office with three years.

In those years, the number of strikes occurred for four months, one week.

That is one month for every nine months spent in the office.

Next is the regime of Goodluck Jonathan, who spent five years in office.

In those years, the ASUU strike took place for 12 months and four weeks.

That is one month for every four and a half months in office.

And to the present regime, President Buhari, in his seven years in office, the ASUU strike has occurred for 15 months, and it is still counting.

The frequency of strike is one month every five and a half months in the office.

This automatically increases the number of months of strikes for the present regime.

#BREAKING: @ASUU_NGN Has Just Extended The Warning Strike By 3 Months.

The National Executive Council, NEC, of the union made this known via press briefing few minutes ago.

"We have decided to extend the strike till August 1st, 2022" – @ASUUNGR Chairman#ASUU#ASUUstrike

Also, the regime has the highest number of ASUU strikes in Nigeria’s history.

Many students are at home hoping that the federal government will do something about ASUU’s request.

From the situation of things, there hasn’t been any resolution.

However, let’s hope this is not so.

Please share with us in the comment section what you think about the situation of the ASUU strike.