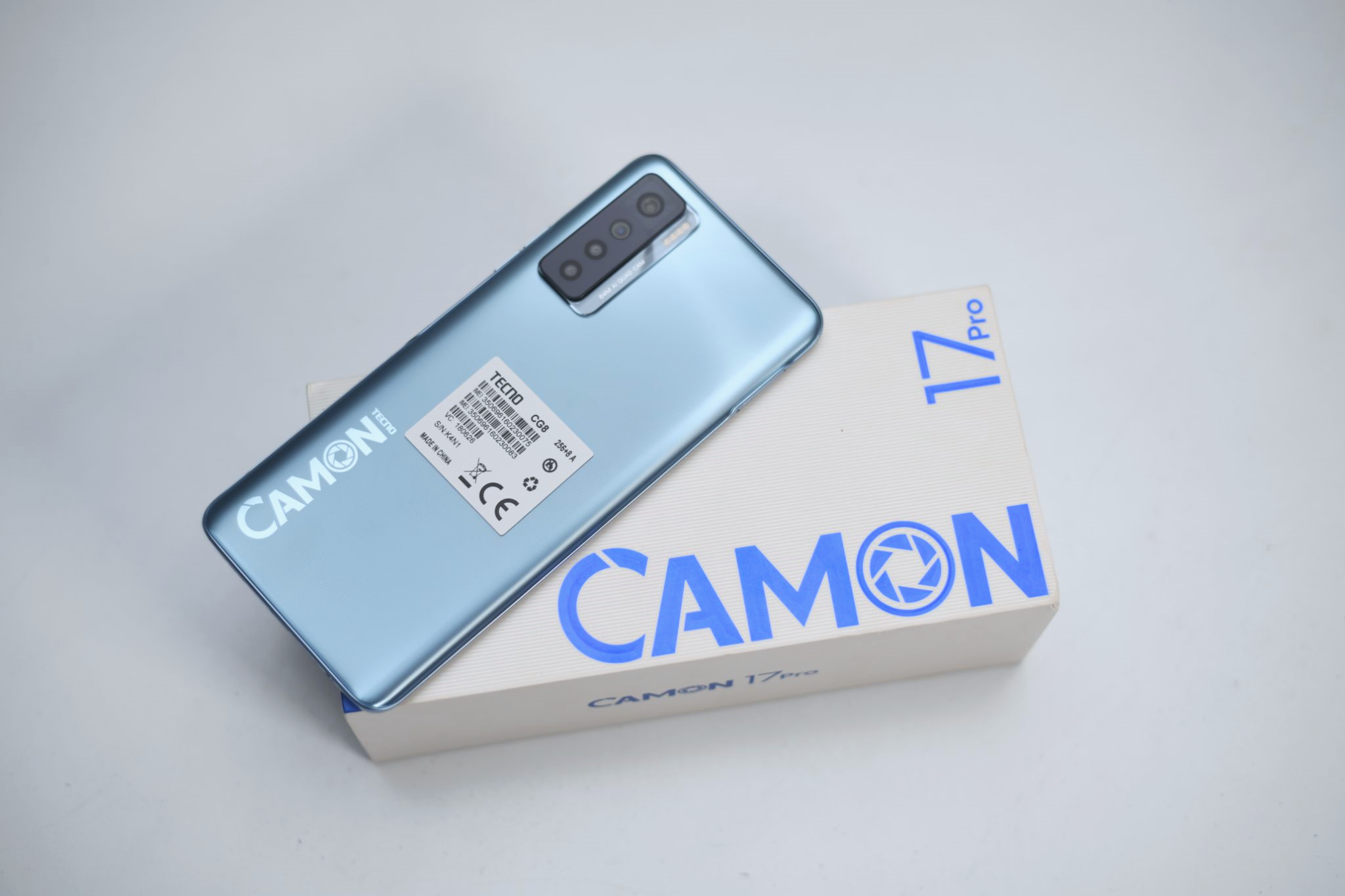 If any phone maker has mastered the art of innovation, TECNO should be first on the list, thanks to the latest CAMON 17 Pro. The Transsion Holding mobile brand has evolved from being a mere feature device mobile maker when it launched in 2006 to one of the world’s most innovative mobile brands with the African continent at heart.

The latest Camon 17 Pro officially launched on the 8th of May to join TECNO’s camera-centric Camon Family.

The new flagship device is a successor to the Camon 16 Premier, which debuted in October last year; it also marks its first flagship launch this year.

The new Camon 17 Pro device lived up to its camera expectation just like others before it, spotting up to 5 cameras – a quad rear camera setup and a punch-hole selfie camera.

However, despite sharing the same number of cameras as its predecessor, it boasts superior performance.

Also notable is the device’s aesthetic; although familiar, it adds some new details, such as the new rear camera setup, which, unlike the predecessor, is arranged vertically with the flashlight positioned by the right side.

There is also, the apparent continuity of the fingerprint sensor, which is strategically positioned on the power button, just like the Camon 16 Premier.

What’s in the box? Find out for yourself 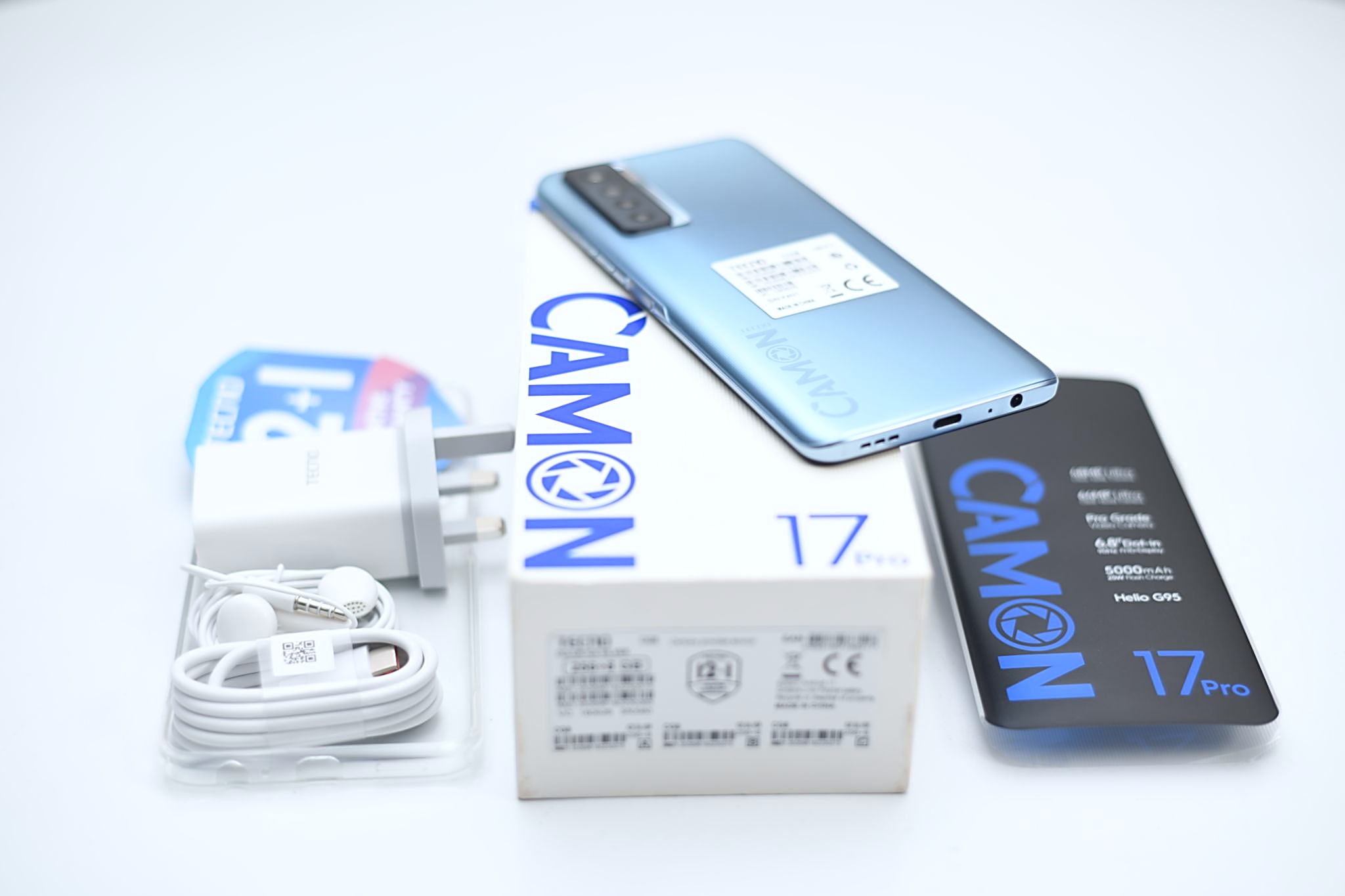 As seen in the image above, the new Camon 17 Pro comes with almost the same set of accessories as older models; a silicon pouch, Charging brick, ejection pin, Type-C cable, headset, and a 13-month warranty membership card.

The most notable part of the Camon 17 Pro design is the central positioning of the selfie camera. Unlike what we are used to, TECNO isolated the selfie camera from the device’s bezel to eat slightly into the display.

Another fascinating thing about the Camon 17 Pro design is the hybrid casing – a mix of rubber and plastic.

The way the back of the device is built makes it seem like transparent glass with blended multiple vertical stripes to form an overall unique design. Guess what? The casing is fingerprint and drop resistant.

The rear camera has also been repositioned such that all four primary and secondary cameras are arranged vertically. While the new positioning isn’t entirely strange, the new Camon 17 Pro camera protrudes more than what obtains on other TECNO devices.

Everything else remains the same; the headphone jack, mouthpiece, Type-C charging port, and the speaker grill are still sitting at the same position as the previous model. 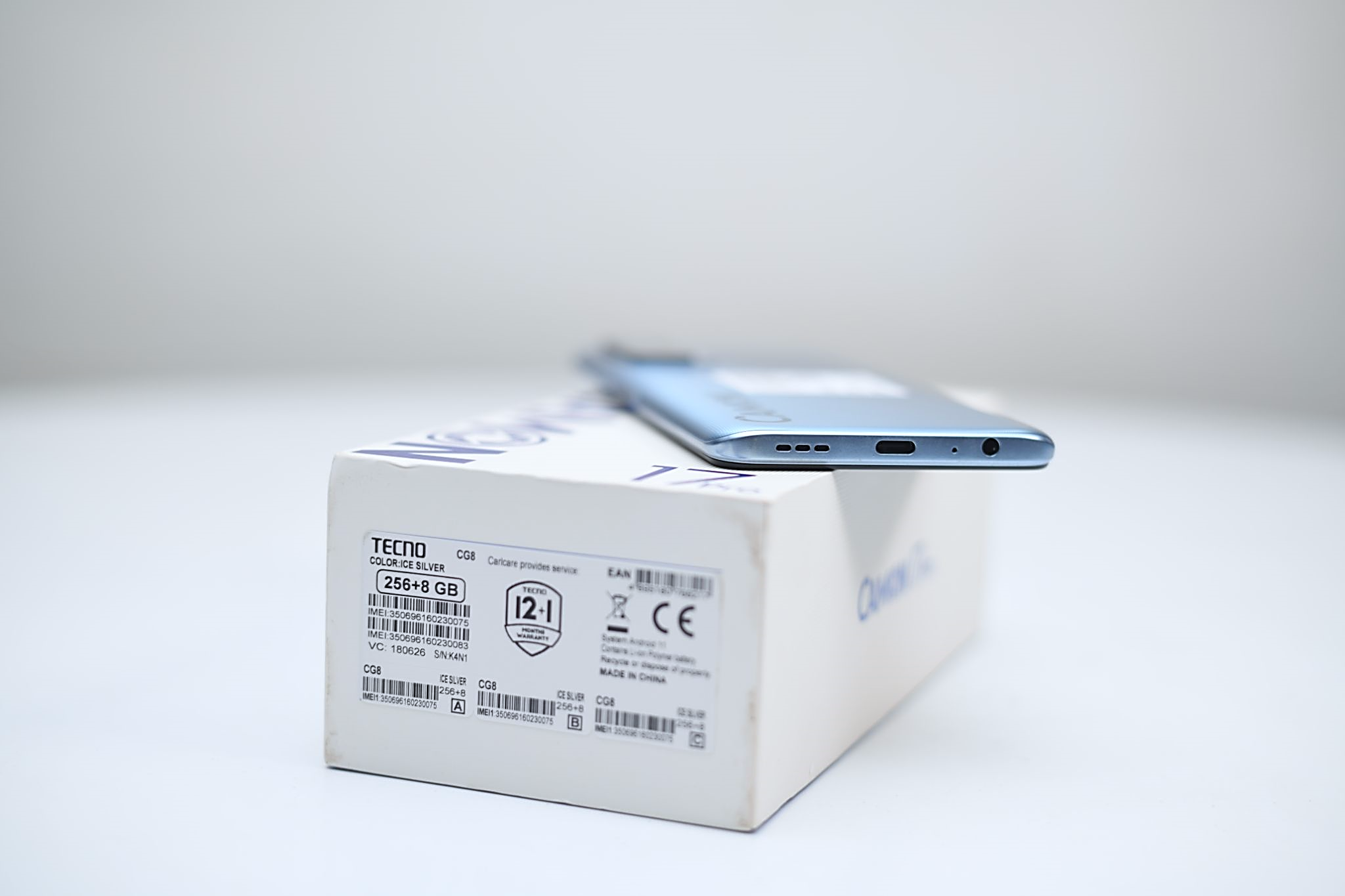 Interestingly, TECNO, for the first time, introduced a secondary microphone on its device to help with noise cancellation, especially when making calls. The feature can also be very handy when shooting videos, as it helps with clarity and an overall enhanced audio performance.

Additionally, the power and volume keys are still positioned by the right side of the device, while the SIM jack is still sitting pretty by the left side.

The latest TECNO Camon 17 Pro sports a 6.8” IPS LCD with a screen resolution put at 1080 x 2460 pixels (395 PPI density). It also boasts up to 90Hz screen refresh rate (SRR), which is on the average side when compared to other high-tier devices with up to 120Hz. Regardless, the SRR for the newly-released Camon 17 Pro is a good fit for its price tag.

Although there was an overall improvement in the new display, the bezel size is still as bold as the previous Camon 16 model. However, TECNO can do something tinier and less space-consuming.

In addition to the more advanced face unlock feature, users can explore other alternative security features, like the side-mounted biometric lock, pattern lock, and the more conventional passwording.

While there have also been improvements in screen output, TECNO has maintained some dedicated features that are health-friendly.

One of those features is Eye Care, which helps regulate the screen brightness for efficient and healthy screentime when activated. I watched a couple of YouTube movies with the feature turned on, and though I didn’t get the best of the cinematic colours, I didn’t feel any form of strain on my eyes, compared to when the feature is deactivated.

Another feature, the Peek Proof, is a privacy feature that enables users to prevent a third party from staring at the screen. This works like a window blind and can be swiped from the top and bottom to meet at a midpoint depending on the user’s choice.

The Camon family is peculiar for its remarkable camera feature, and this is no exception. The Camon 17 Pro features a main quad-camera consisting of a primary 64MP wide-angle lens, 8MP ultrawide lens, and 2MP Depth and monochrome lenses. 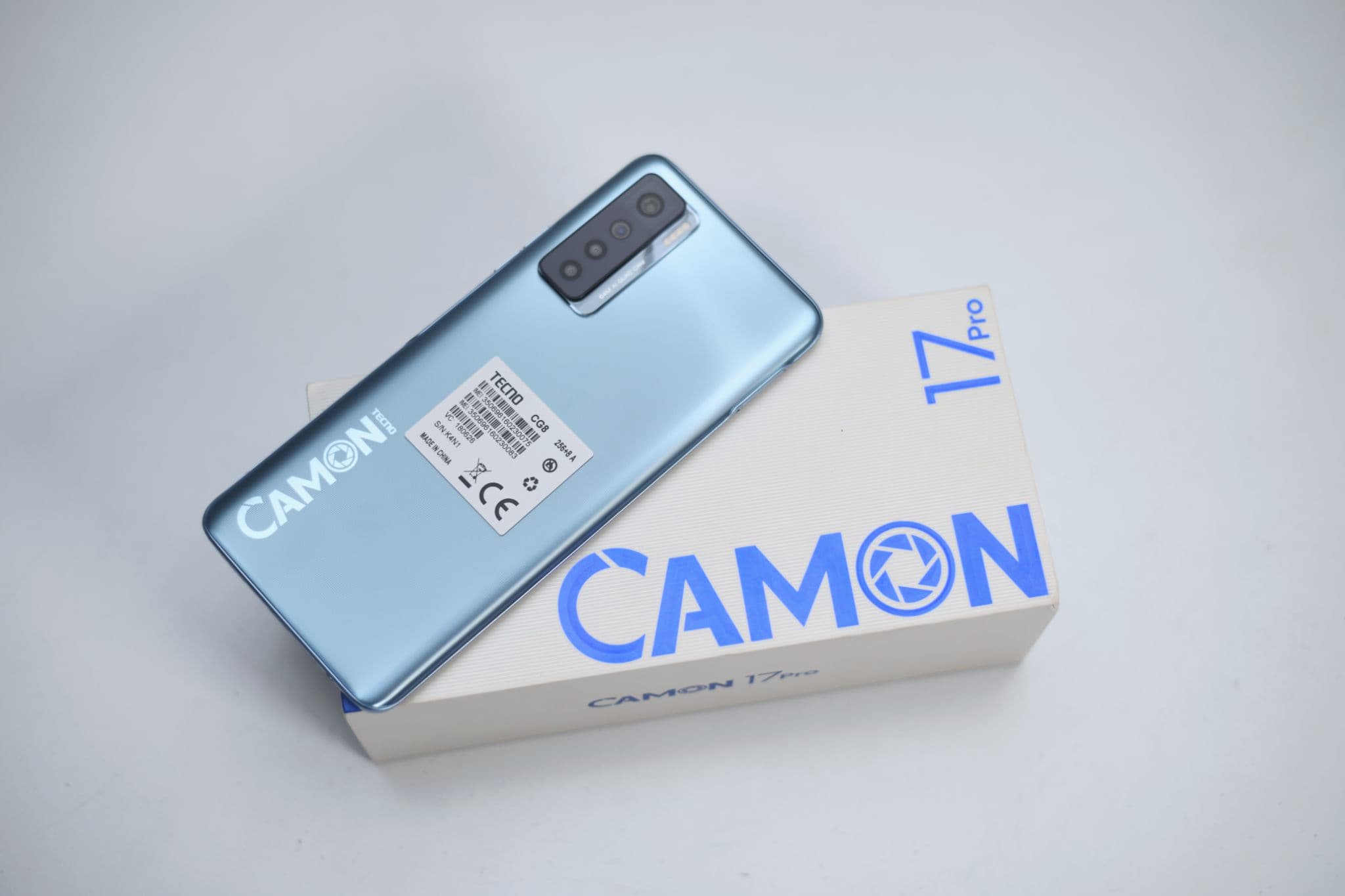 On the other side of the device sits a single centrally-positioned hole-punch 48MP camera next to a dual-LED flash.

Notably, TECNO has improved on the natural feel of its camera output; now, objects appear more natural and realistic than the more distorted output we had with the earlier Camon models.

The pictures below were taken with the normal cameral, beauty, and AI camera, respectively. 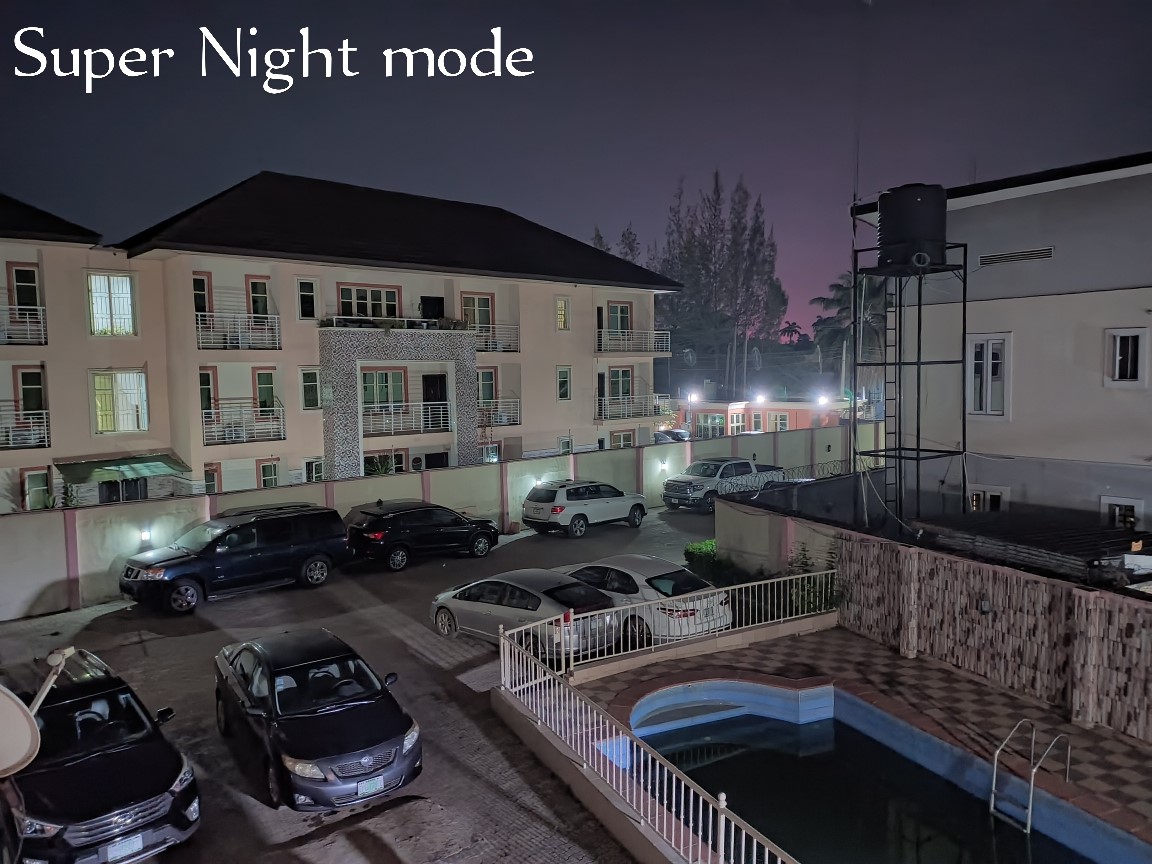 Other notable features of the TECNO Camon 17 Pro

The Camon 17 Pro is fingerprint resistant and can also resist an altitudinal fall of up to 2 meters (at least according to our test).

The new Camon 17 Pro is also water-resistant; although no official IP rating was stated, we submerged the device for up to 30 seconds and there was no direct impact on the device. Notably, when we removed the SIM jacket, we came across a gasket we believed helped to keep water or any form of liquid from penetrating the device.

Performance-wise, the new Camon 17 Pro is a top contender in its category with the device’s high-performing chipset and computer processing unit. 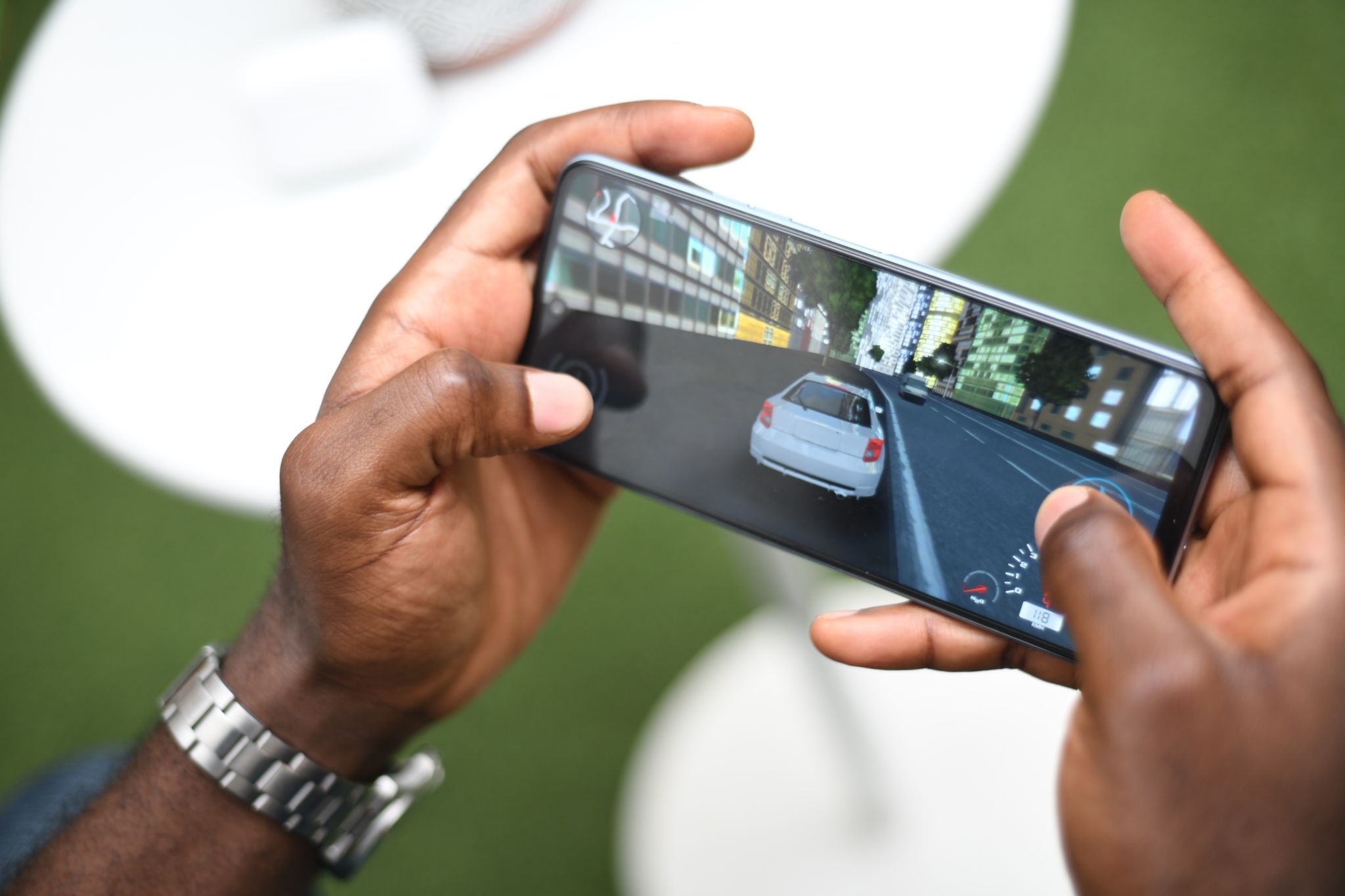 A dedicated Gaming Processing Unit is built on Mali-G76 MC4 graphic processor; this allows the device to switch from its normal function to a Gaming Mode for smoother and convenient gaming.

TECNO officially rolls out the truly wireless Earbuds 1. TECNO did a great job, especially at keeping the Earbuds within a very portable measurement. For instance, you can easily hide the entire buds case in a fist without anyone finding out. Yes! It is that small.

Although the TECNO Earbuds share a very familiar look with Apple’s recently released Airpod Pro, it is slightly bigger in its case. However, compared to the lots in the market, the TECNO Earbuds boast a competitive size. 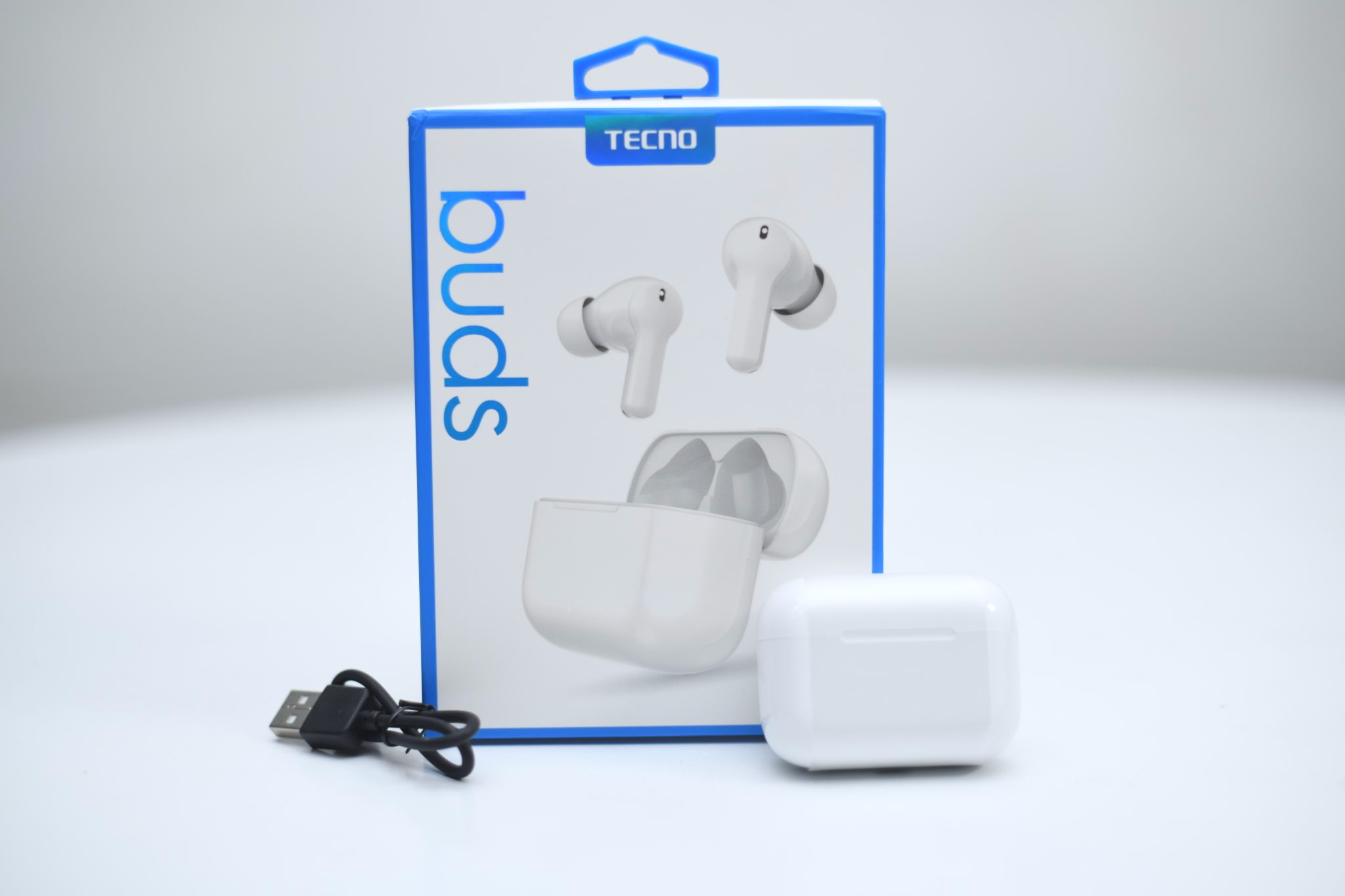 Aside from the buds case, other accessories include a manual for first-time users, a Type-B USB cable, and an extra set of ear tips. With the additional ear tips, users can easily switch between the medium-sized and the large-sized ear tips. 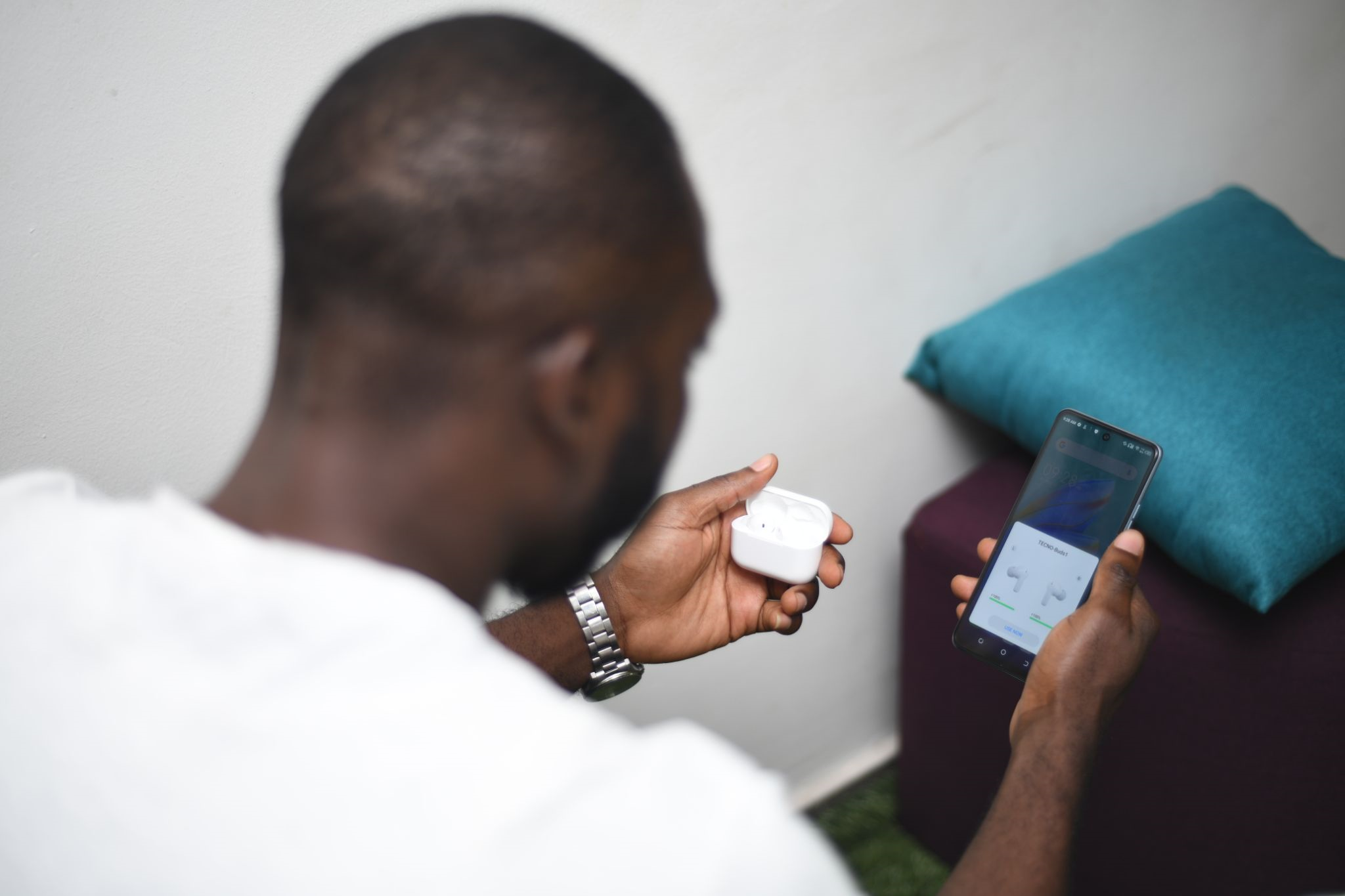 Once the buds case is opened, an instant notification asking for the wearable to be paired comes up on the TECNO device’s screen; a user can pair the wearable thanks to the buds Bluetooth 5.0 feature, which aids strong connectivity.

Once paired, a user can continue to enjoy an uninterrupted sound output.

Interestingly, users can enjoy up to 4-hours of playtime on each earbud before requiring another charge – a considerate amount of playtime for buds of this category.

The sound output of the TECNO earbuds came out surprisingly great, for its token price of about N8,000. 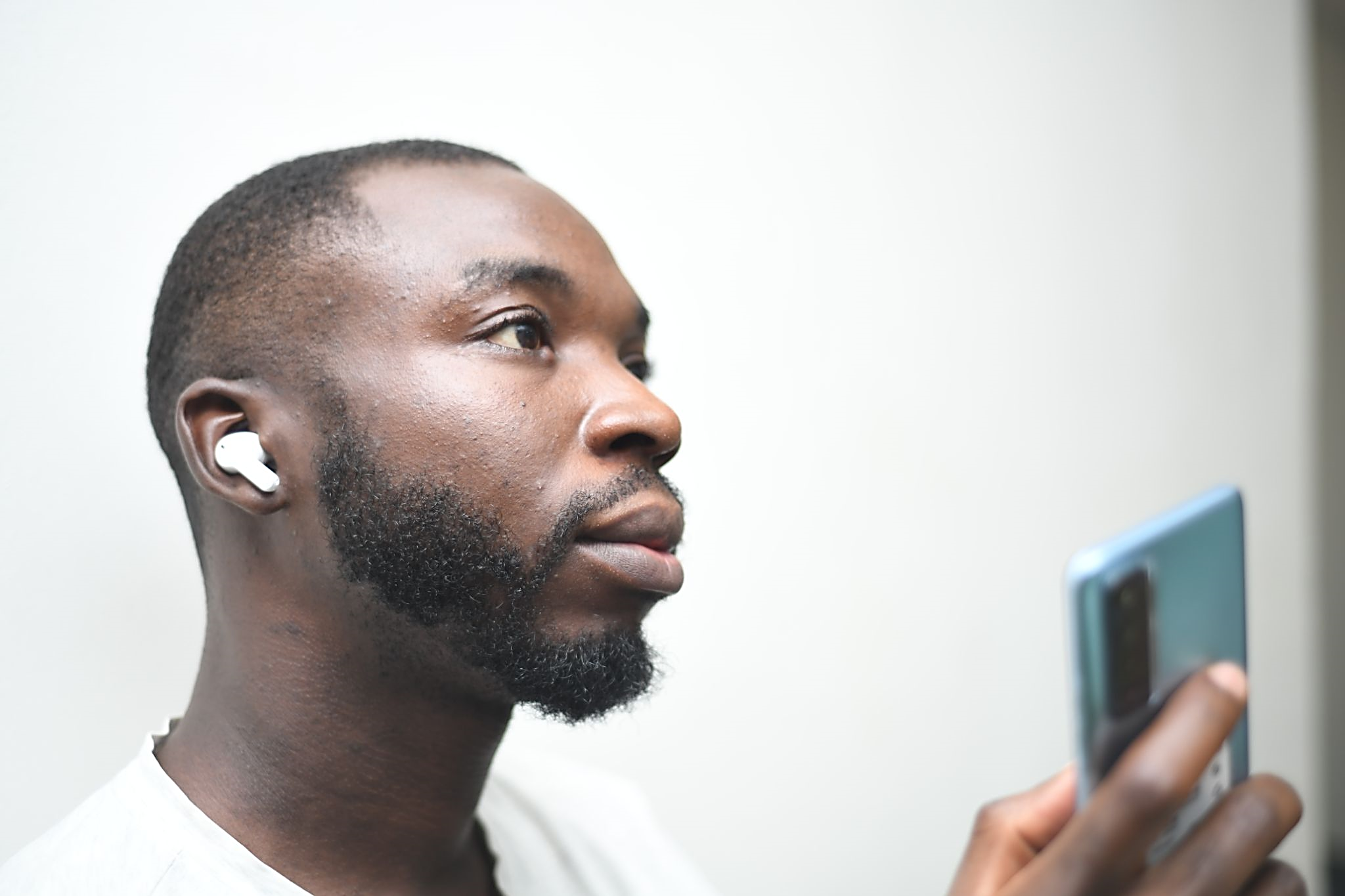 The buds come with a gesture control that can be navigated with the touch-sensitive surface on the protruding part of both buds. There is also a mic at the lower stem of the buds used for calls or recordings. Below are simple tips that can help you navigate the wearable functionalities seamlessly;

Volume up – long-press the right bud

Volume down – long-press the left bud

To activate AI Assistant – tap on either buds four times

Next Song – triple-tap the right bud

TECNO equipped the new Camon 17 Pro with some of its best specs yet. Video-wise, the Camon 17 Pro rear camera can shoot in 4K mode at 30fps (frame per second) and alternatively on 1080P at the same 30fps. On the other hand, the selfie camera is only capable of shooting on 1080p at 30fps also. 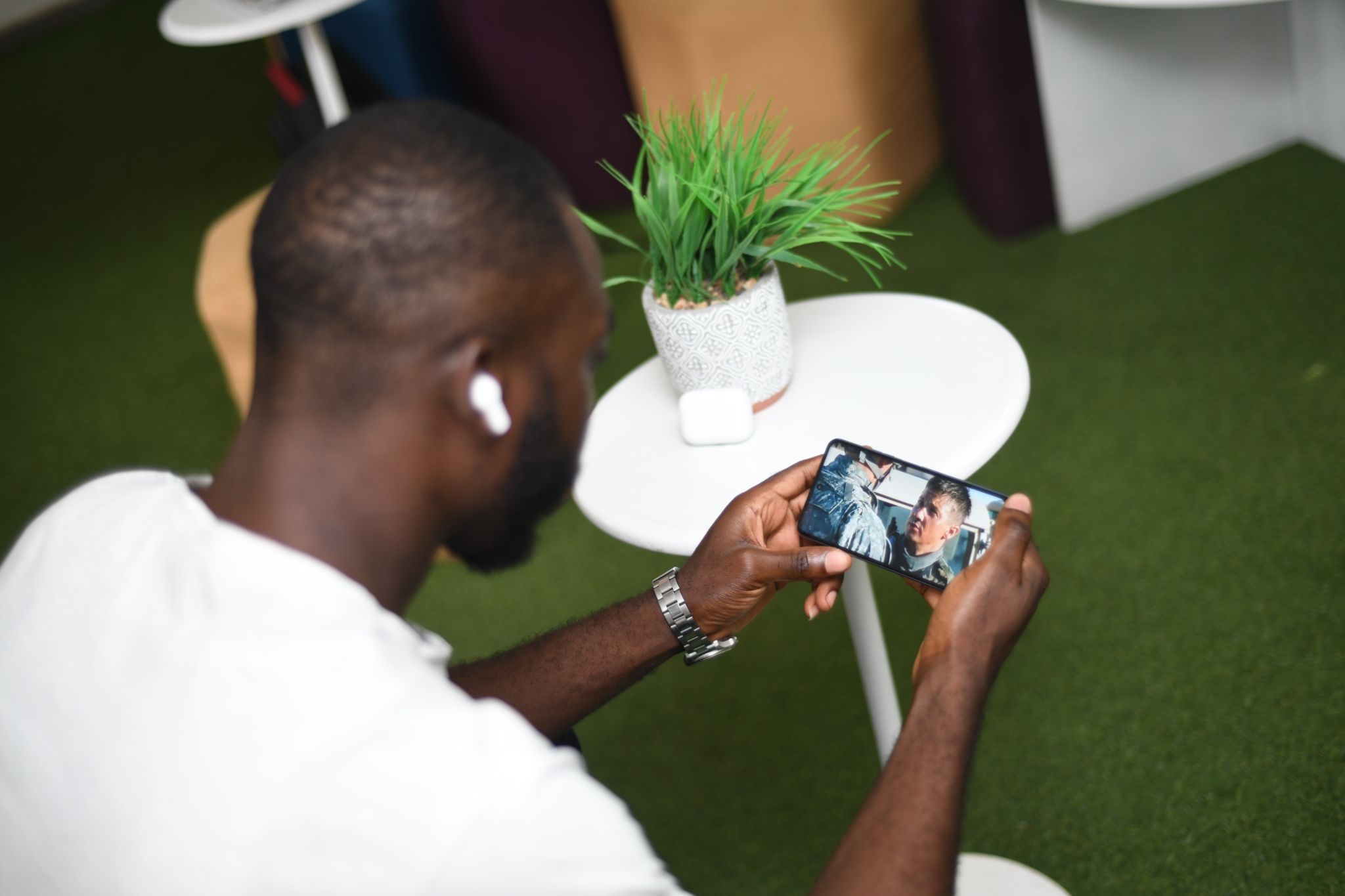 TECNO also delivered fantastically concerning sound output, thanks to the auxiliary mic. The device also comes with a dual stereo speaker positioned at the top and bottom of the device.

Another interesting news that trailed the launch of the Camon 17 Pro is TECNO’s announcement of joining the Android 12 Beta program. Interestingly, the latest additions to the Camon family will be among the first batch of devices to run the new Android™ 12 Beta, bringing the earliest experience of the latest Operating System to early adopters.

We downloaded the pre-release versions of Android 12 Beta on the TECNO official website to have a hands-on experience and it was a great one.

The Camon 17 Pro is powered by a 5000 mAh battery,  the same capacity as its predecessor –  Camon 16 Premier. Accompanied with the super battery capacity is a 25W fast-charger which, according to the company, can power up the device in a short time. Well, that claim may be relative as it took up to 2 hours and 25 minutes to power up the device from 0 to 100 percent.

The overall power consumption appeared to have improved significantly as the new device tends to last longer than the previous model. During our experiment, we discovered that the Camon 17 Pro could stay powered for up to 3 days under normal usage compared to the two days recorded on the Camon 16 Premier model, under the same circumstance.

In rating the battery life, we would give 9/10 ratings, compared to other devices in its category with similar battery capacity.

The new Camon 17 Pro is priced at ₦128,000 and will be available in two colour variants – Dream Silver and Malibu Blue. Interested buyers can visit any TECNO accredited store nearest to them or perhaps shop from any of Nigeria’s leading e-commerce platforms – Jumia and Konga.

The TECNO Camon 17 Pro is a good buy if you are looking for a mid-range device with a strong capacity for hectic activities. It is worth every penny, and most importantly, it packs a lot of intelligent features that can be put to use on the go. Therefore, we will rate it 8/10.

Do you find this review helpful? Kindly drop your opinion and feedback in the comment section below.

Mercedes Benz Car You Can Drive With Just Your Mind

A Global Tech Review On The New Infinix Note 10