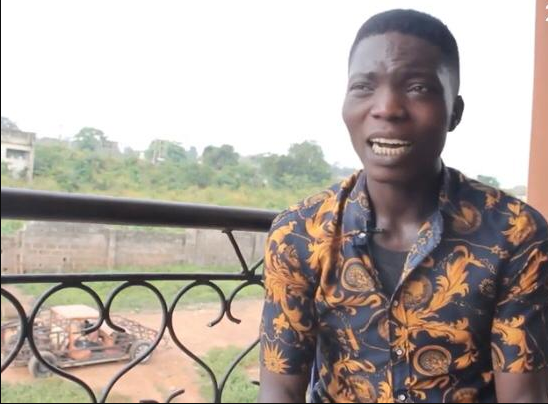 A wise man once said that no human ever became interesting by not failing.

These words subtly capture the intriguing story of a 28-year-old chap in the rural town of Kube, Ibadan, South-West, Nigeria.

Ibitoye Olajide Michael has proven, beyond a reasonable doubt, that possibility and success lie on the other side of failure.

For someone who wrote the West African Examinations Council (WAEC) a record seven times, Michael radiates an infectious aura found in people who have accomplished tall and intimidating dreams.

His consistent failure never deterred him from entertaining the thoughts of being called ‘Engineer,’ which has become his nickname in Kube.

Unlike his peers, Olajide became his own inspiration. It took him three years of grit and self-belief; even when others doubted him, he still trudged on.

His doughty spirit kept him going and inspired him to develop an innovation befitting his title, a high-speed car.

On Thursday, November 5, Techuncode met with Olajide in his home at Kube’s slummy area, where he shared his fascinating story and the inspiration behind his remarkable yet uncelebrated feat.

At first, the young innovator was reluctant about taking us to his place. Why? In his words, “I live in a slum.”

However, his story would not be complete without visiting his place of abode.

Riding in his car, which he christened ‘Cephalofoil,’ another name for the Great Hammerhead Shark, the journey from Gate in Ibadan to Kube was a thrilling one as passers-by, and other motorists couldn’t hide their admiration at the ‘Wonder Wheel’ in front of their eyes.

His area was close to what he described; the kind you see in almost all parts of Nigeria – the typical face-me-I-face-you apartment.

His house, a one-storey building, was on the right with a well sitting in front.

The well serves as the source of water for the house and others beside it.

The streets were deserted except for a few students returning from school.

They stopped to admire Cephalofil, sitting majestically in front of the house.

Some residents also starred, not at the car, but at the strange faces with the camera setting up to speak to their golden boy and give him the rare opportunity to tell his story.

A graduate of Botany from the Olabisi Onabanjo University (OOU), Ago Iwoye, and an indigene of Ekiti State, Engineer Olajide said that he sat for WAEC 7 times because he kept looking for the grades he wanted, thereby revealing the tenacious side of him.

This trait came in handy when on July 19, 2017, he set forth on his now-successful quest of building a car.

He met with a lot of discouragement, and in his words, “That was what kept me going. I needed to prove them wrong.”

And proved them wrong he did! With a 1.6 Volkswagen Gulf engine (4-speed gear) in his Cephalofil, his invention outclasses that of a motorcycle; speed-wise, a claim TechUncode could verify having ridden in the car.

Having started from an early stage by experimenting with toys, Olajide evolved into a modern-day ‘Einstein,’ though, not a finished product yet, but undoubtedly one in the making.

His innovation, which might not be surprising to many, especially in a tech age, is a welcome development for a country and continent presumed to be a ‘dumping ground’ for technological innovations.

Related Topics:Cephalofiltechnological innovations
Up Next